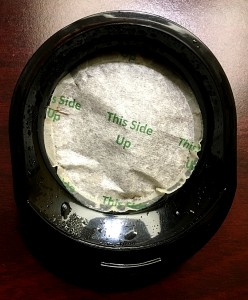 I am up early. This hotel is full of folks, and there’s one slow elevator in the whole building. I’ve already thrown some clothes on and taken my guitars down to the van, just to get one load out. Because I want to get it done; because this morning I just don’t feel up to the familiar potential elevator inquiry: “What kind of music do you play?” Please, not that, this early. Though yeah, it is indeed a low-grade stressor. I should just start saying “death metal” and be done with it. When I get on, I’m much relieved that I’m descending solo. As the elevator door opens again and Ms. Automated Voice declares that I have indeed landed at my intended destination–“first floor” she says with the primary emphasis on “first” but then the slightly casual lilt on the end of “floor” to lighten the tone towards a generic optimism—anyway, the door opens and here’s a skinny guy in a light blue ball cap who’s likely just come from the fitness room, judging from his wide-awake countenance—“Hey buddy” he says, slightly amused by the two guitar cases and amp I’m carrying. I say good morning with what must have been a bemused yet wry expression on my face, and we each go on about our business. It’s still dark out, the cool air feels clean; even this parking lot among parking lots in this Atlanta ‘burb is charged with a strange beauty—what is it? The stillness, the dark just beginning to fade, a few unseen birds among the finely-tuned landscaping, doing their gig, calling out the morning; dew on the cars catching the pasty light of the overhead arc lamps which are still lit for now.

I stayed up last night and actually opened a book for the first time in several days, one of an ever-changing pile I carry around on the road in a green backpack. From Mary Oliver’s book of essays, “Upstream”, I started in on the piece about Emerson. I was sleepy, and didn’t get far, but I read enough for it all to come back to me: how crucial real reading is to the mind (and to the spirit, if you’re diving into the right non-toxic pond). My mind, at least. She quotes the subject of the essay: “Sleep lingers all our lifetime about our eyes, as night hovers all day in the boughs of the fir tree.” A gorgeous sentence, and especially good right before clicking off the light with the hope that I can let out enough slack in the line to let consciousness fade into the dark of this numbered room and get some solid sleep. And I guess I did, until five a.m.

There’s a silly framed photo on the wall above this desk, of an old clock face with roman numerals stopped at eight minutes to twelve. Why do I think it’s stopped? What am I supposed to “get” from this image? Time waits for no man, except when the damned clock is broken? I know, I know; it’s just filling space on a wall. Some designer whose job it was to outfit these hotels with a new look at a faaaab-u-lous price decided that ordering several thousand of these gems and hanging them just-so, all over their properties in these United States, was the way to go. Balance, an artificial sense of order—all that blather I tend to resist, but know that a certain degree of which is indeed good for me. Oh and what’s that? Behind the wall, a single peal of a woman’s voice indicating a state of um . . . temporal ecstasy. Good morning to you, too; glad things are going well for you over there . . . .

I’ve had one cup of the in-room coffee, which I’d rank about average, (a 4 outta 7, because let’s face it—you never get to a 10 in this particular arena of hotel amenity) from a thin styrofoam cup that only makes me worry about the off-gassing of chemicals and such that are not good for me—but to move towards functional consciousness in short order it’s a gamble I’ll take. And move on. To the next room, which today will be: home.