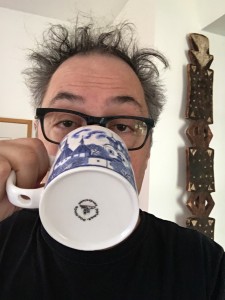 Or at least it is as I write this. Just now getting on the back side of this tour, that has been at once exhilarating and exhausting. So many great folks I’ve met for the first time, or have seen again, at my various stops along the way. I slept late this morning, so I don’t have a lot of time to post something with the usual zillion links, etc. But I did want to reach out and say hello while drinking a strong cup of coffee–and thank everyone who has come out to one (or more!) of the shows, and especially thank my various hosts along the way. There really is nothing quite as welcoming on the road to a worn-out body and bent mind as a nice hotel room, but with friends like I am lucky enough to have, the added hospitality and fellowship have been such good things to this lone traveler that I haven’t missed going through those doors with numbers on them one bit. (Though, Joe and Lorna, that Hampton Inn you generously boarded me in in Dover NH the other night was perfecto!)

Playing tonight in Belmar, NJ–my first time to play in this part of the state, the part I referred to as Springsteenland (whether exactly correct or not!) when talking with someone yesterday. Looking forward to it. I sent a facebook message to my old friend Southside Johnny, whom I hear is back in NJ, but I don’t know if he’ll get it before tonight. If you know him, feel free to pass on the info, as I’d love to run into him again. I’ll be at 10th Avenue Burrito, playing what I suppose must be a “dinner show”, ha ha, as I joked last night at Hill Country BBQ in DC.

Tomorrow will be the first day “off” since September 23, though it will be a drive day, as I’ll be heading towards Charlotte, NC, where I return to the Evening Muse on Thursday with special guest and new pal Tom Rhodes. Friday I head back to Nashville, where I close one of my favorite gigs of the year, “TOMfest“, a birthday party for friend and super-fan Tom Drew, at The Family Wash. Also playing will be Dan Navarro, Anne McCue, and Eric Brace & Peter Cooper. Open to the public–come on down and check out what condition my condition is in after these few thousand miles. I’ll have fellow troublemakers Joe McMahan, Joshua Hunt, and Tom Comet in the band with me.

Thanks to Geoffrey Himes for his incredibly kind mention of me in his recent review of this year’s Americanafest that appeared in/on/at Paste. Just when you’re possibly feeling a little ignored, somebody comes along and squashes that silly notion like a roach on the kitchen floor. (Jeez, I’m one eloquent mofo this morning–ha!)

I’m playing Saturday in Nashville as well–with a fella by the name of Buzz, or some such. More about that in my next installment. Gotta hit the showers, and then the road–

One Response to Note from Arlington