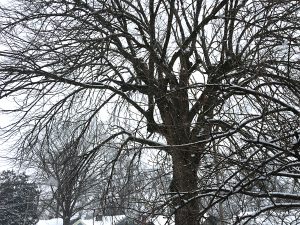 So much for a “year-end” blog post! Dang, I looked up this morning and two weeks had gone by.

It’s a quiet morning here in east Nashville. You see, we’re being snowed on/in again(snow still falling from a northwest wind, at about a 45 degree slant), and even here in the “upper” South, travel tends to slow down, if not stop—errr, slide off into the ditch. But I welcome it—somehow the weather provides good reason for internal focus, (and interior chores), so why not sit down with a hot cup and write for a while. I love how the snow soaks up what sounds there are out there—an insulation of sorts. Always cool to see the ever-familiar landscape of “home” change temporarily in such circumstances, too, though this house sure isn’t made for temps in the teens. Keyword: “layering”!

I’ve got a birthday coming up on Thursday—and though I am slowly coming around to the idea of embracing and frankly, feeling proud of and lucky about the number and what all it represents, it’s still a little difficult. Various people in my life have told me for decades to grow up; I steadfastly refuse. To grow is one thing; to “grow up” is something else entirely–something less about living, less about joy, and seldom about growing, really. I RESIST! And I feel very fortunate to live the good and crazy life that I do.

Last-minute show alert!  THIS FRIDAY, January 19, should you find yourself in Nashville, I’ll be celebrating that birthday by playing a show with my good friend from NY, Pete Mancini, who’ll be performing in band formation this time around, our second show together at the legendary Douglas Corner, all the way over on the other side of the river. 9 pm start. I’ll be playing some songs from the forthcoming new record, and who knows what else. More info: https://www.facebook.com/events/369410090154335/

On Wednesday, January 24, I’ll be playing another Nashville show, at Betty’s, out on the west side, sitting in with my friend Michael Dinallo and several other pals including Tom Hambridge and Dave Jacques. More details forthcoming. 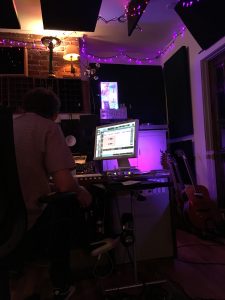 Mr. McMahan at the controls

I’m here to tell you, among other things, that recording is finished for the new album! Joe McMahan is sitting in the control room in the studio as I speak, starting to mix a third track from the record, a song Gwil Owen and I wrote called Right on Time. We have mixes for Saint on a Chain and a song I’ve played out with the band only a couple of times, called Fire at the End of the World. I’ll write more about each song at a later date. But it feels so good to hear and feel things coming together—during the recording process we seem to go by “feel”, by intuition, and of course by Joe’s direction as producer. And in that phase there is a general hunch when you’ve gotten a good “take”, but that’s all—you only start feeling more certain about it after the recording phase is done and mixes start being “printed”—that’s when the whole thing starts to sound like a record. It’s also when I start thinking about how the songs go together thematically (or not)—combing lyrics for a possible name for this new animal, whose paw prints are unidentifiable, whose roar and cry is alien, unfamiliar, new. What is it saying, what does it need? And part of getting it right, if we do, is to let that strangeness exist—to not beat things into the old familiar—to let new be new, and “let it eat”, as is said.

My team and I are working on the details of a forthcoming Pledgemusic campaign, to help offset recording expenses, and hopefully provide resources necessary for getting the record out there, i.e. marketing. Of course you’ll be hearing much more about this very soon.

Other social media stuff: I’ve finally started messing around with “stories” on Instagram. Follow me there and catch the chaos. Most of my posts (except for blogs) these days start there: https://www.instagram.com/kevingordon/

Egads: flurries and single digit temps out there. Think I’ll stay inside this drafty house and have another coffee, and do what I can from indoors today. Last night I finished one of the books I got for Christmas, James Baldwin‘s The Fire Next Time, which is quite the little 100-page explosive–Baldwin’s ever-present eloquence is there, and he is very much his own man–a fiercely independent thinker, and, as is obvious in the current documentary “I Am Not Your Negro”, an astounding orator. Perhaps the most profound thing about reading this book now is that it could have been written yesterday. It was originally published in 1963. Think about that.

Some of my resolutions for this year are: To read more. To connect more. With the unvarnished word. With people. In writing, and in life. To give without expectation, and to accept that which is given with gratitude.  To act out of love instead of fear. To believe in myself more consistently (which for me, well, let’s say I got a-ways to go) and push harder for what I want and what I need. To give openly and honestly to those I love, which includes both praising them and celebrating their accomplishments, as well as calling them on their “crap” when they’ve got it coming, and to accept same from them when it’s my turn. Willful silence is a toxic cauldron, and is in no way merciful, IMHO. And to put all this forth might be better done with a reformed self–more prayer, meditation, and, yes, exercise. I fell off that particular horse a while ago, and have never made it back. Walking and running out on the greenway and elsewhere did me a lot of good, and I must get back to it.

Happy New Year! And thank you for your love, friendship, and support of my efforts.

As always–got a problem with merch you bought online or at a show? A question, a complaint, a compliment? Find me here: kevingordonmusic@gmail.com

I’ll be hitting the road hard once we get close to the release of the new record. Is there somewhere you’d like to see me/us play live? Reach out to my agent, Val, at the mighty Mongrel Music: val@mongrelm.com