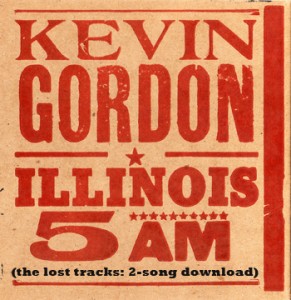 Happy winter, everyone–
Today, via my bandcamp site, we released Illinois 5 A.M.(The Lost Tracks), a download of two tracks which first appeared on the limited-edition (and now long-out-of-print) EP CD, “Illinois 5 A.M.”, in 1997. The five other tracks from that EP were from a 12-song master produced by E Street Band bassist Garry Tallent, which ultimately became the first record for Shanachie, “Cadillac Jack’s #1 Son”. These two “lost” tracks are bookends, in a way–“City of Refuge” was recorded in 1994; “Illinois 5 a.m.” dates to February 1997. The sessions with Garry Tallent took place between October 1995 and February 1996.

Over the years there has been continued interest in the original EP, and specifically, in these two tracks. Because of this demand, keeping these tracks in the vault no longer made much sense. With this download, (and the Cadillac Jack’s #1 Son record) you can now make your own “Illinois 5 A.M.” playlist–here’s the original track sequence from the EP:

FYI, on the original EP release, the ” Junior’s Guitar” track fades in at the beginning–this was not replicated for the Shanachie CD.

This new download comes with a 4-page PDF booklet, based on the graphics of the original Illinois 5 A.M. CD jacket. Also on the bandcamp site you can purchase downloads of the “o Come Look at the Burning” record. All downloads are available in a variety of file formats. Look for other special downloads via bandcamp over the coming months.