I woke up in Texas this morning, and it’s looking and feeling a lot like Spring, at last. I play the first of 4 shows in Austin tonight at 7pm CST, at G & S Lounge (Main Bar), part of an “East Nashville Special” night presented by NotSXSW mastermind John Conquest. And the best part of this news is: if you can’t be there you can stream it live, via one of these links(not sure which channel shows which stage):

And if you’re not in Austin, it’s likely I won’t be handing you one of these, about all my shows this week, so here it is in “virtual” form: 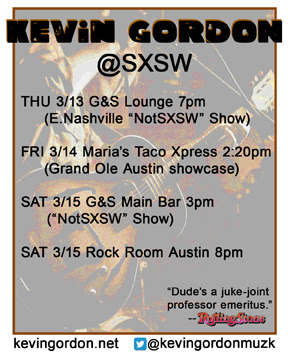 You should be able to stream Saturday’s G&S show via the same ustream links above, too.

I’m in writing mode again, trying to have as much material ready as possible before we go in to start recording sometime in the next month or so. I’ll probably do at least one of these really-really-new ones during my sets at G&S, and at my other shows here in Austin.

Shows coming up next week: sitting in with Monty Russell at Portico in Ruston LA, on Tuesday 3/18; playing a solo show at Sundown Tavern (on the patio, weather permitting), Ruston LA, on Wednesday 3/19, 6pm; I’m in Oklahoma City OK with my good friend Rod Picott at the Blue Door on Saturday 3/22, and also playing a house concert presented by Scott Aycock, in Tulsa on Sunday 3/23. As ever, check the tour page for details.

Yes, I’m going to make a record this year, thanks to all of you who’ve sponsored this effort. The plotting and scheming continues. For more info on the funding campaign and the different levels of sponsorship, visit here: http://kg.kevingordon.net/2013-sponsorship-campaign/
Any questions? Bring ’em on: kevingordonmusic@gmail.com

Keep those cards and letters coming! Hope to see you soon–