Long-overdue greetings from Nashville, friends–I should mention before time gets away from me again that I’m proud to be participating in a special show this coming Saturday, at the 5 Spot here in east Nashville; here’s some info for ya: 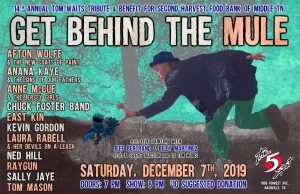 The 14th Annual GET BEHIND THE MULE: Tom Waits Tribute & Benefit for Second Harvest Food Bank of Middle Tennessee music & visual art event is back at The 5 Spot in East #Nashville, TN on SAT., DECEMBER. 7, 2019.

All proceeds from the gate and art sale are donated to Second Harvest Food Bank of Middle Tennessee.

A suggested donation of $10 will be collected at the door. You are welcome to contribute what you can in support of the music and helping your neighbors fight hunger. No cans or other food, please. Just dough.

Otherwise: I’m still alive and essentially functional; I haven’t been out playing shows in a couple of months, and just haven’t been in “public mode” lately, except for a couple of brief or undercover gigs. A little bummed out. Existentially gray, but glad to be here. I do remind myself (when I remember) that I have more than enough to keep me busy with all this time around the “estate.” Not touring reminds me of how much it means to me, and how good it can be for the music (and for the person rendering that music). Touring is travel, yes. And that’s cool, a lot of the time. But it’s also communication, with an audience of varying number and attention span. But a show is always an opportunity for me to do what I do and try to connect with people through that. And when that’s going well, there ain’t much that feels better. Of course, it’s also work, and that is something for which I’m always grateful.

A songwriter is one who writes songs: And often just stares at the wall. In late October, I started what might be a new song–and that feels great, whether it becomes something or not. Yesterday, I started another. Otherwise, I’m playing guitars–always, always trying to get better–though sometimes it’s hard to tell what “better” means.

Valve stem caps. Guitar picks. I lose them. Recently I was inflating a low tire on my wife’s car, at the gas station, and I got all turned around because the credit card machine didn’t appear to be working (though it appeared to be virtually taking my money); luckily I did take along eight quarters just in case I had to go analog. Which I did. Finally, the hum of life–the machine came on. Five whole minutes of positive air infusion! Alright! Tires on one side were low, (I’d checked them earlier) but by the time I was bending down to the nearest one, I couldn’t remember if I was on the correct side–because those pay-for-air machines SUCK, and are purposely slow, so that the chances increase that you’ll have to throw in more money. But I finally got around to all four, then put the hose back. Opened up my hand and saw three stem caps, not four. Sigh. So, I go looking around the car, feeling a bit punked by my own (in this case) low-grade dumbassery. Nothing. Nowhere. Wet black asphalt. Black as rubber, black as . . . a valve stem cap. I gave up. Then I remembered that I had an extra couple at home, for just this situation. An easy solution to a very small problem compared to all we face as humans and citizens here on the planet.

New Frontiers–Appliance Repair: Last week the dryer stopping producing heat. So what’s a person of able means to do but . . . go to YouTube and watch some videos on dryer repair! By comparing them and the suggestions of the various video’d experts put forth, you can kinda figure out who has the best, common-sense-solid ideas. And miracle of miracles, after a quick run to the store to buy a multi-meter, I was able to diagnose the problem, and find a vendor in town who had the part in stock. And I fixed it. An easy repair, but for the mechanically challenged such as I, it was enough reason to stick out one’s chest just a little, for a little while. Now the dishwasher is making all sorts groaning sounds . . . this chapter to be continued . . . .

I’m thrilled to be invited to perform again at the 30-A Songwriters Festival down in Florida next month–always a great place to find yourself in January. And a wonderful event, too. Then it’s on the New Orleans for the annual Folk Alliance conference. Getting one’s folk aligned aside, it’s New Orleans, so hoorah!!! Watch for other possible shows in the area . . . I’ll stay in touch–and will do a much better job of it than I have been!

My Struggle (Book Six), by Karl Ove Knausgaard (yes, still slogging away at this one)

Transparent Gestures, Rodney Jones. (poems) The first book of his I ever bought and I return to it occasionally.

Walks to the Paradise Garden: A Lowdown Southern Odyssey, by Jonathan Williams, Roger Manley, and Guy Mendes. A recent publication of an archived manuscript by these three, adventuring into the world of folk art and artists in the mid to late-80s. A time capsule of sorts. Published by Institute 193, an arts organization based in Kentucky and NY doing good good things.