Yes, per usual, I’ve been pecking away at this post for a while; alas, life keeps getting in the way. I got home from the tour very early last Tuesday morning at about 2 a.m.; a 12 1/2 hour drive according to Google Maps turned into a 15-hour marathon after encountering various construction and accident-related delays–to be expected, given the distance from Nelson, NY to Nashville– 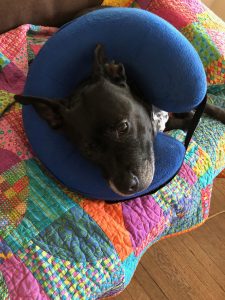 My domestic re-entry has been challenging, but I’m used to the adult dose, so: so be it. Pearl the Dog had surgery on her left back leg (the knee, specifically) while I was gone; she’s recovering nicely, but does require some extra TLC. But she’s smart as hell (to use a phrase which makes no sense) and tough. Bears the “collar of shame” well–especially since Boo got her a nice inflatable blue donut that seems much more comfortable (and perhaps less humiliating) than ye olde plastic cone.

The unfortunate combination of physical etc. road fatigue combined with a literal pile of things to catch up on (including spontaneous issues that pop up like HVAC failure in 90-degree heat) does not put KG in a very joyful frame of mind, as happy as I am to be home–but on I go; because I can, because I must. I don’t want my life to be defined by, or as, a to-do list, but sometimes one’s semi-enlightened ass must do it to it, and get it done. That’s where most of the “meaning” is, I suppose: in that doing, in the everyday, the present tense–I always hope I’m aware/awake enough to catch that as it goes by. Although the best thing I wrote during the tour happened one day when I had a half-hour in a hotel room to myself between arrival and soundcheck–not long enough to nap, but enough to settle down into a semi-conscious lull, yes. And in that back-of-my-eyelids twilight some lines started running through my head, and scavenger that I am, I wrote them down. They’ll show up in something, eventually. So, maybe that “awake” part mentioned above isn’t meant to be so literal . . . .

Always an honor and pleasure to play this amazing event, which feels cozy like a neighborhood festival, yet provides more live musical pleasure over 4 days and nights than you could ever get in one place in any neighborhood; even mine! We play the club stage (hooray!) at 7:45 p.m. For more info: http://www.fitzgeraldsnightclub.com/

We love Natalie’s! One of my favorite venues anywhere, this place has a good-size stage in a great-sounding room. AND, some of the best pizza (and other menu items) in tha world! Not a bad seat in the place–if you’re in the area, come see us! 9:30 p.m. show. Presented by Bob Teague and Friends. For tickets and other info: https://nataliescoalfiredpizza.com/events/kevin-gordon-2/ 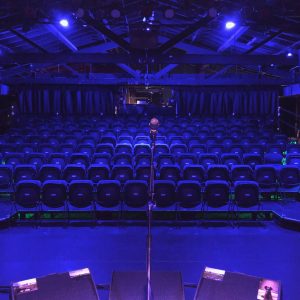 June was busy busy busy–starting out with a bang, playing a couple of really fun trio shows at Twangfest in St. Louis, and Americana Day in Watertown, TN. The support gigs with Todd Snider were, as ever, great. They’re a little glimpse into what it means to be treated like a human being, or, to view it less melodramatically: to be afforded some relative luxuries like my own dressing room and to see my contract rider actually being fulfilled. (It is not very extensive, believe me.) Unless you do this crazy thing of traveling around playing your songs for folks, it might be difficult to understand how profoundly grateful one is when these things are made manifest. Yep, I’ve changed my pants in the back of a van on many a summer afternoon when getting ready to play a show, and though my life is richer for the experience, I’ll take the option of doing same in an air-conditioned room with a locking door any time. Thanks to Todd, his crew, (and for that matter, his audiences, who are receptive and friendly, as a rule) for having me along, and treating me so kindly. Great venues, promoters, and staff everywhere we went. Todd put on fantastic shows every night, and every night the show was different. He was “on”, in a big way.

The final shows of the tour were trio gigs–with Ron Eoff on bass and Marco Giovino on drums. That’s one “world champeen” rhythm section there, I guarantee ya. We had an absolute blast. Played the Rochester International Jazz Festival–two shows in a small theater setting; the room was full for both, and I think I set a personal record for merchandise sales (and for the level of audience enthusiasm received!). The only thing that marred my day was my decision to (unnecessarily) re-park the van in the hotel garage, two spaces over from where it had been the night before. Yes, I was backing it in slowly, like always, watching the rearview while listening for the familiar sound of the back bumper kissing the wall. Instead, I heard something quite different–the sound of the van’s back window bursting into a zillion pieces (and my immediate response of a few very colorful words at about the same volume). Turns out the lip of the next concrete ramp going up stuck out about six inches more than the rest of the wall. When I moved the van over, I didn’t realize that I would encounter this new obstacle. Blew my vibe totally, and I was very anxious about this gig. But: what do you do? Do what needs to be done, which, after a couple of phone calls to glass repair places, meant giving up on a same-day repair, and getting ready for the show. A run to the car wash for the vacuum, and a stop at a Home Depot for Visqueen and duct tape, got us and our gear home without the boat taking on any water–

Final show was the next night, out at the Nelson Odeon, east of Syracuse, NY. A fantastic smaller venue run by great people–I recommend it to anyone as a perfect place to see a show (or play one, though I’m sure the proprietor, like at most other venues, is overrun with solicitations). A smaller crowd, but no less enthusiastic–we had a wonderful time. Thanks to Jeff, Linda, Eric, and the volunteers, who all helped to make this such a fine way to end the tour.

A question: What would you most like to see on my merch table, or in the online store, pre-holiday season? I’d like to do something special, and I have a few ideas, but I’m wondering what yours might be. Feel free to answer with a comment on this post, or send a note to kevingordonmusic@gmail.com, or via book-of-faces, etc. Whatever I do, I’d best be getting on it SOON.

Have a great week!