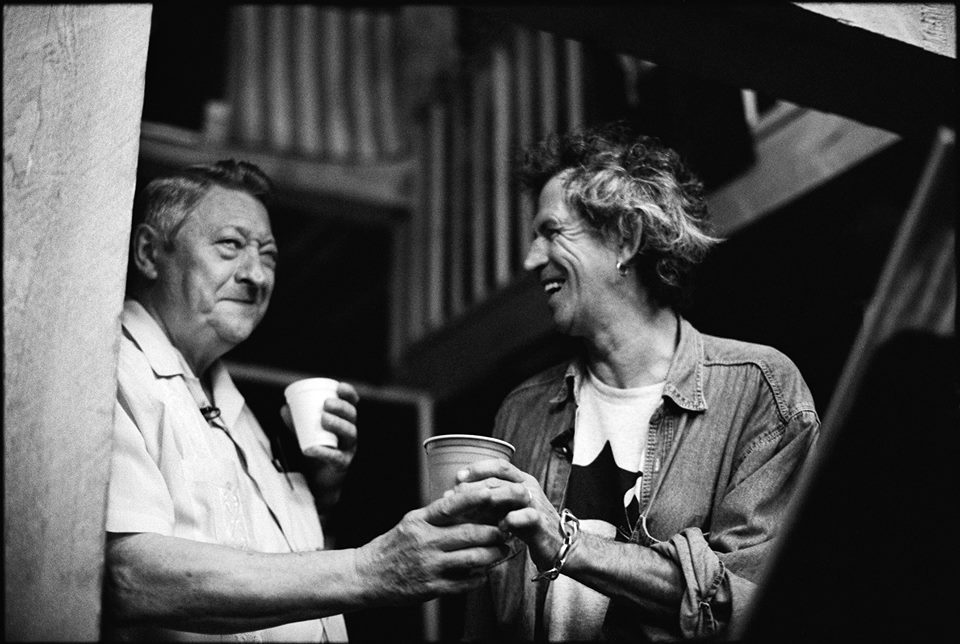 He passed away this past Tuesday, one of the chief architects of rock n’ roll. I only met him once, after he, Keith Richards, Levon Helm, and others cut a song I wrote with Gwil Owen called Deuce and a Quarter, in the summer of 1996, and released on “All the King’s Men” on Sweetfish Records in 1997. ATKM was a tribute record for Scotty, Elvis Presley’s first guitarist, and D.J. Fontana, Elvis’s first drummer, who was originally from Shreveport, LA, my birthplace.

Scotty’s and D.J.’s manager, the late Dan Griffin, took me and a couple of others out to Scotty’s house, which I believe was out around Ashland City TN, just northwest of Nashville. It was one of those things that, at the time, you can’t quite believe—though he was such a nice guy, and very welcoming. I remember someone asking him about particular Elvis shows, and he had amazing recall, using his memory and a book he referred to (whose title I can’t remember). I only wish I’d had the presence of mind to stay in touch with him, to get to know him better. And yeah, maybe to ask him about that one lick from the Sun sessions w/Elvis that Keith apparently still can’t figure out, according to his autobiography (and I can’t remember which track it’s on at the moment)! (Though why I think he would have told me, I don’t know!) And there’s a particular and peculiar kind of “stumble” thing he played on at least one of the more obviously blues-oriented tracks, kind of a club-footed T-Bone Walker lick, that I sure wish I’d been able to ask him about. The most obvious example is on EP’s version of Billy “the Kid” Emerson’s “When It Rains It Really Pours”. Some of my favorite solos or parts of solos include the beginning of the 2nd solo in “Hound Dog” (about 1:22 into the track, those two chordal “growls”), and that wildly chromatic ride on “Too Much”. How bout that nutty start to the solo in “Money Honey”? But really—it’s the whole mix, right? What came to be known and grown as rock n’ roll. You can hear him going back and forth between country and blues (with an occasional foray into “pop” songs like “Harbor Lights” or “Blue Moon”), a conversation with itself in related languages like Spanish and Portuguese, but going out from the somewhat predictable towards . . . something else, a new language. Those crazy dissonant bends, that would often occur at the end of a solo that had been otherwise faithful to the song’s melody, like what had come before, what was expected, a la Chet Atkins. As with anyone’s passing who’s been such a major cultural force, Mr. Moore’s death provides (unneeded) incentive to revisit his playing in a different light. I’ve loaded an old iPod with the Sun Sessions as well as a couple of the early RCA LPs, and plan on doing several hundred miles over the next week giving those records that I’ve loved since I was kid in the single digits a fresh listen.

More about Deuce and a Quarter: It was one of four songs that Gwil and I had written after I’d made what would become my first release for Shanachie, “Cadillac Jack’s #1 Son”. I’d started it in early 1996 and finished it with Gwil that May. Along with “Deuce”, there was an early version of “Casino Road”, “Pueblo Dog”, and, I think, “Marina Takes Her Aim”. Three of those would later end up on my next record, “Down to the Well”, but at the time were just what we’d been working on. Dan Griffin called me and asked if we had any new songs; I told him that we had four, but that they were all so weird that I would likely be the only person to record them. He asked for a demo of them anyway, and explained what he was working on, the project that became the “All the King’s Men” record. So, with a beat-to-hell Shure SM-58 (at that time, the only mic I owned), plugged into an old Boss analog delay guitar effects pedal (that I’d bought from Bo Ramsey circa 1989), into a cassette deck, I set about making demos of those songs, just vocal and acoustic guitar. I sent it on, not thinking much of it, since these kinds of possibilities are like lottery tickets with even worse odds.

Much to my surprise (mixed with a little horror, because of the lo-fi quality of the demo I’d sent), about a week later I got another call from Dan, saying he’d been riding around Manhattan in a limo with Keith Richards listening to my demo and that Keith, along with Levon Helm, Scotty and D.J. were going to cut “Deuce”. Having then lived in Music (Business) City for long enough to know not to put much hope into a “gonna-happen” like this until you had the record in your hands and played it and found that your song was indeed on it, Gwil and I were mildly excited, but knew better than to take it as a sure thing. The session itself was still about a month away, and, considering some of the personalities/habits of the folks in question, well . . . anything could happen.

I think it was early July—my wife and I were at the in-laws’ place in Okoboji, Iowa. I can’t remember who called whom, but Gwil told me that he’d gotten a very late night call from a mutual friend, photographer extraordinaire Jim Herrington, who had been hired to shoot photos of a recording session at Levon’s barn near Woodstock, NY, a session in which Keith Richards, Levon, Scotty Moore, D.J. Fontana, and others (mostly members of The Band) were on—they had recorded “Deuce” that day. Jim didn’t know the song was ours until the subject came up that night while a rough mix was being put together. So it was through Jim’s phone call to Gwil that we found out that the session had actually happened.

When the record came out and I first heard their version, I was a little under-whelmed—it felt so slow, compared to the Rockpile-esque quick tempo I was used to. But it has sweetened over the years—maybe I got smarter, maybe it took some time to realize how special the track is simply because of who played on it and the fun they apparently had while recording it. (Jim’s photos document some of that fun very well—one image that was published in Rolling Stone is of Scotty and Keith about to fall off their chairs, with guitars on, laughing at each other.

I just found my journal from this time period; this entry is dated July 15, 1996:

“Went over to Dan Griffin’s yesterday—heard the Deuce & a Quarter cut—great—at first seemed slow, but I think it’s o.k. now—just sounds like a wacked-out Chuck Berry track—Keith’s solo a little buried in the rough mix—clean tone, which I didn’t expect—vocal’s good though—they changed the phrasing on the turnaround, but that’s o.k.  Keith sounds like he’s singing ‘green stains’ on the 2nd chorus—but who cares, it’s Keith Richards singing something we wrote—

“Went out to Scotty Moore’s house in Joelton, too. Nice man, looking old, though—he reminded me of (my paternal grandmother)—the mannerisms of an older smoker—something in the voice, too . . . incredible to be sitting at this guy’s very normal kitchen table—watching him look up info about where he played in Richmond, VA w/Elvis—in a book . . . . We had gone over there to take him his and D.J.’s gear—D.J. still uses the same throne he used with Elvis—a padded piece of round plywood with a couple of nails holding on the hardware.”

I’m forever grateful to Dan and everyone who played on the recording and made this incredible stroke of luck happen . . .

Heading back out on the road tomorrow—check the tour page for details, but the short version is:

These are all full-band (quartet) shows, with Tom Comet, Paul Griffith, and Joe V. McMahan. Come on out and dig in!

Posting from back in the back
KG and the RNC, NYC 2004