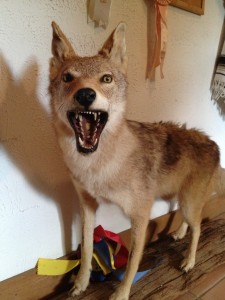 A friend in Louisiana

but you’re not moving so fast. (This critter was watching me eat my dinner, north of Monroe several days ago.) I’m back from Louisiana, now with three weeks off the road ahead. Will I lose what’s left of my mind? It’s possible. Where’s that dirty windshield I usually see through? Didn’t I have a bottle of amber and a shrimp po-boy around here somewhere?

Since school has started, I now have the house to myself for most of the day, and except for the occasional dog-riot or religious (and/or commercial) solicitor, the quiet is good and plentiful. So I’ll be working on new songs as much as I can, trying to get a good group together to record sooner rather than later. At some point this week I’ll surrender the van to my mechanic again, in another attempt to get it through emissions, and therefore back into lawful status. After driving about 1500 miles my last trip, the dreaded “check engine” light came BACK on, which probably means there’s another ($350) oxygen sensor replacement in my future. Sorry to complain–I realize this is a comparatively minor annoyance–but as they come, it’s a plain pain in the ass. If I’m gonna stress out about dodging the cops (until I get new tags), I’d like for the stress to be spent on something more substantial, ha ha.

Just finished Toni Morrison’s The Bluest Eye, her first novel. Now reading a book on the Colfax Massacre, an event I was somehow unaware of when I wrote that song. And Walden, (on the iPad, which seems just wrong somehow, though Thoreau’s spirit and eloquent language still come through.) I put on James Brown yesterday morning while reading the NY Times obituary for Albert Murray; my son has been turning me on to Earl Sweatshirt. I need to listen more, yes; I’m trying to “get it”, I am. But part of me says there’s nothing to get–it just is. What did he rhyme with “aorta”? It’ll come back to me.

Up in Arkansas, down in Louisiana
Sleep, moonlight, and a few other words