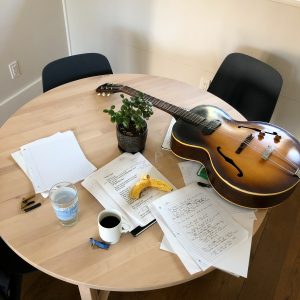 Thanks to all of you who so kindly took a moment out of your busy lives to wish me a happy birthday yesterday; for the last few years I’ve had the great fortune of landing here in Florida, playing the 30A Songwriters Festival, on “the day”–though of course I would love to celebrate with my family and friends at home, it’s been fun being here with various members of my music family–for whom I have so much love and respect–the other artists and writers I’m friends with, the volunteers who make such tremendous effort towards making it all run smoothly, and all the people who come from all over to hear us play in various venues in this beautiful region.

Last night I played my second show of three. I was in a bit of a funk–I’d gotten soaked when hustling my gear through a formidable rain, from the van I’d had to park a block or so away, and in the process had lost track of that appendage none of us can seem to live without: my phone. Didn’t have time to retrace my steps, nor do much but grab a water and set up, and bang! We’re on. (Before you do anything meaningful, it feels right to have a minute to just . . . breathe, yes?) I was sandwiched (literally) between two undeniable Forces of Nature: the wonderful Sarah Peacock and Amy Speace. Though we’d decided to stand for the set, for some reason all the stools on the stage were removed, so there was nowhere to perch while one was not at the mic, doing one’s deal. So it became a kind of absurdist performance art–you’re being watched by a room full of people, and . . . one of us is playing, and the other two . . . aren’t doing anything. Standing. Still. Looking at the floor, at a certain point in the air over there. I can’t say it was my strongest set; though folks here are appreciative listeners, last night I was, as I joked with the audience, “the vocalist among two singers.” Good God, those women can sing. And write. And play. And I was blanking on my own catalog, between my turns–what should I play? How can I follow THAT? Etc. etc. The ever-faithful inner voice. I’ve been writing a lot since I got here–really honing in on three new songs and making great progress (I think). So, though I’m excited about these, was I ready to play any of them in front of an audience? Dunno. While worrying about that, I forget the songs I already HAVE. It’s silly. I did split the difference: played “GTO,” a few songs from the latest album, and one of the new ones. Which I did okay with, and which got a good response. Whew. Early in the set, Sarah and Amy led a “Happy Birthday” sing-a-long, the first time I think that’s ever happened to me during a show–it was really sweet.

After the show, Amy and I had a sandwich and talked. The “don’t care anymore” (to put it politely) aspect of turning 50. Mutual acquaintances, stories–some positive, some . . . not so. The “more mature” I get, the healthier disrespect I have for the music business. (Probably works both ways, ha ha.) While loving the music itself all the more. And some of the finest people I’ve ever met work in this field. Weird deal, eh? Lucky I am, absolutely, to be able to do what I do, and grateful. But inevitably at times feeling like the sucker at the carnival, who just remembered, again, that he has, by choice, handled these particular loaded dice before. I guess that happens to a lot of folks, no matter what our personal and professional endeavors are. But we keep going, doing what we love, because we can’t stop. Long as we can. What we do becomes who we are. For better or worse. It’s not a career. It’s a life. Til life stops. Beautiful, confounding, with every twist and turn that irony, fate, and circumstance can take and hand to you, and say “so whadda ya gonna do NOW?” And in this current Crazytown world, where the jackals seem to be leading the game by a larger margin than in a very long time, the more beauty and love any of us can bring to the table, the better.

If some of this isn’t making total sense, too bad. I am writing all this after getting last night’s bad news:

After loading out of the venue, I drove back to where I’m staying, a beautiful carriage house in an isolated area on the “bay side” of things here, about 10 pm. Then I heard that my friend David Olney had collapsed onstage three songs into his set last night at another festival venue, and passed on. Maybe the fact that it was my birthday added to the feeling–that awareness of one’s own mortality, that you’re always walking that edge, whether you admit it or not. As Todd Snider sings: “Enjoy yourself; it’s later than you think . . . ”  I didn’t know what to do in the moment. I was tired; I had not had any alcohol. I was sitting at the table here, and got a guitar out and played for a long time. The LG-2 for a while. Then the National. Slide. Gospel. Blues. Whatever . . . life music. While in my head there was this silent disbelief, or shock. I’ve often referred to Olney as “the Buddha of Nashville.” Such a kind, smart, uber-talented, and supremely wise man. I remember meeting him (and another fellow, a friend of his, named Van Zandt) at one of the first parties Boo and I went to after we moved to Nashville. A true individual, a proud eccentric, one of the greatest songwriters ever, who did exactly what he wanted and nothing more, or less (though some years ago he did have the misfortune of playing a restaurant/sports bar in my hometown, to a roomful of people who had no idea the gift they could’ve received, had they been open to it. Sorry, David.) This was a man who carried poetry inside him, close; who could recite Coleridge, Shakespeare, et al. (the HEAVIES) at will, at length, and often did, when the spirit moved him in the middle of a show, or on your porch. “Water from a deeper well”– sho nuff. I did pour a wee dram of bourbon, and raised it to David in brief silent tribute late last night. Got in bed, tried to sleep, though was trading messages with friends here and elsewhere about what had happened for a long time.

I have one more show here at the festival, this evening at Rosemary Beach Town Hall, at 6:30, with Davin McCoy and Dan Rodriguez. Maybe I’ll try another one of those new songs. See you in a few days, New Orleans—

Bang! And so it begins . . .
Nashville Tornado

7 Responses to 30A Ramble/David Olney

Leave a Reply to Chelle Click here to cancel reply.