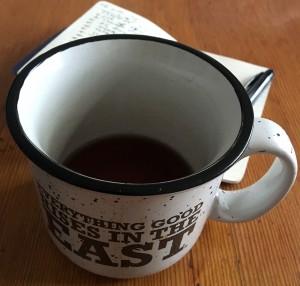 I hope this finds you well and warm. I’m just reaching the end of my 2nd cup of coffee, essential fluid for morning data processing and pro-active motivation and motor-vation (there’s an oil change and tire rotation in my very near future). Laundry is, as ever, in progress; the washing machine is on spin, so there’s a chorus of old window frames (un)steadily rattling in percussive harmony all over the house. It’s been good to be home for a week, after having such a great time down in Louisiana with my fellow singing-songwriting pals Ben De La Cour and Chris Watts. Despite a temporary over-indulgence in drive-thru daiquiris (a uniquely Louisiana phenomenon) and fried seafood, there were no arrests, and the things we did not get arrested for I will not mention here. This is a family show, after all. Moving right along: a few things on my mind–

Tomorrow begins a new solo tour, in Cape Girardeau, MO; I’ll be going on up to St. Louis Wednesday, Iowa City, IA on Thursday, Ankeny, IA(Des Moines) on Friday, Loomis, NE on Sunday. Then back to that very romantic destination, the house of love that is Byron’s in Pomeroy IA, for a special Valentine’s Day show where I’ll play only Frank Sinatra covers. (Just kidding: only Bob Dylan would do that to ya, and actually, yeah, those songs are spectacular; that’s why Bob’s doing them.) Down to Little Rock, AR on 2/16 (a world away, but a straighter shot travel-wise than I ever imagined), and, just added: a final show in Cobden, IL on Friday 2/17. As ever, check out the tour page for details, check in with venues before traveling long distances–and let’s all hope for unseasonably pleasant Midwestern weather, shall we? 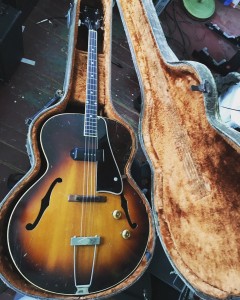 I don’t buy a lot of guitars, because it’s not exactly in the budget, and also I don’t have room. But about a year ago I brought this new old baby into my world, a 1954 Gibson T-50(?) electric tenor guitar. Since I’m traveling solo, I’ve got room in the van, so I’m going to bring it along with me tomorrow. I’ve only played it at a show once; looking forward to trying it again. I had a hard time getting my head around the idea that fewer strings could lead to more musical options/fewer limitations, but it seems true, to me at least.

I quietly slipped an unreleased live track on my Facebook music page last week. For those of who don’t do the FB, you can now stream it via the “Ends & Odds” page at kevingordon.net. At some point I may decide to offer some of these recordings for sale via download, but for now, I’ll just drop a sample now and then.

Yes, I have quite a stack of reading material going, and a few more books have come out of the bookcase, or arrived in the mail, lately: Mary Oliver‘s “Upstream”(thanks, Rick!), Frank O’Hara‘s Selected Poems, Mary Ruefle‘s “Madness, Rack, and Honey”(collected lectures), and Seamus Heaney‘s translation of “Diary of One Who Vanished”(thanks, Kerry!). All this and more: a personal defense against those alternative facts, imaginary massacres, and the current “bigly” strangeness . . . SAD! (ha ha)

Long Gone Time sponsors: It has indeed been a long time–watch your inbox for a separate message from yours truly.

Hope to see you somewhere along the route over the next several days–it’s always more fun with you than without!