I thought it might be fun to dive into a song every now and then, and tell you some things about it that you might not already know. The songs are where the whole deal starts, after all.

“Bus to Shreveport”, from the Gloryland record, is autobiographical; everything in the song really happened, though maybe I was 13, not 12. (For some reason this makes me feel better about the whole experience.) My mom had put me on a Greyhound in Monroe. First time I’d been on one, far as I can remember. I sat next to a girl a few years older; per usual for me at that time, though I saw her as beautiful and very mysterious (she was riding by herself, too), I couldn’t summon the gumption to talk to her. She dozed off and on under a blanket the whole time I was there.  And the 99 miles to Shreveport took  forever—I think the bus stopped in every single one of the little towns along the way. 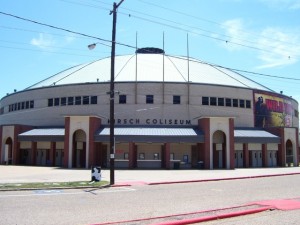 “…the worst sounding arena in the whole United States”

I’ve talked about this a bit during live shows—story goes that ZZ Top used to (maybe still do?) start their tours there at Hirsch Coliseum, at the State Fairgrounds, because they knew it was the worst sounding venue they’d play, and if they could get the sound right there, then it’d be piece of cake the rest of the tour. I think I saw the circus there once when I was still of single-digit age; I’d seen Elvis there a year or two before the odyssey that the song describes. Neither of those events resembled the scene there that night—more THC than oxygen in the air; and as the song mentions, some folks were so excited about the concert that they’d already passed out (from sheer enthusiasm, ha ha) along the perimeter of the floor before Mr. Gibbons and co. could even take the stage. The scene was pretty much the same  for every other show I saw there over the next few years.

The fight after the show took place at the McDonald’s that still stands at the corner of Hearne Avenue/Mansfield Road and W.70th Street.

A few weeks before the first tracking sessions, I recorded solo versions/sketches of every song I was thinking of recording for Gloryland, very quickly and informally (literally not stopping), at producer Joe V. McMahan’s Wow & Flutter studio. It was his idea, a pre-production move, to hear everything at once that was being considered for the project. “Bus” was the last thing I recorded that day, because it was just a fragment at that point. Here’s part of that demo—as you can tell, it’s very, ahem, “casual”—I wasn’t sure what to make of it at that point. I saw it as kind of a throw-away. After I played it, Joe said something like, “Hey, what the hell is that?” and suggested I try to finish it for the record.

In April 2009, basic tracks for “Bus” and eight other songs were recorded at the now-defunct House of David studio in Nashville—an old house on Music Row, but a very non-Music-Row, low-key sorta place, where I worked quite a few times. (The duet I recorded with Kate Campbell for her country covers record was cut there).  The song still wasn’t finished—the entire “Don’t Tell”  outro section was something I came up with on the spot, figuring that the song needed to go somewhere else, musically. We tracked live, with two drummers (Paul Griffith and Scott Martin), bass (Ron Eoff), and Joe McMahan and myself on guitars.

Here’s a little piece of a rough mix of what was recorded that day:

Joe’s lead guitar parts, one of my favorite elements in the recording, were overdubbed later at Wow & Flutter, as was my final vocal, and Randy Leago‘s Wurlitzer track.

And yes, you will notice, savvy listener, that something is very different . . . sometimes you listen to those basic tracks a few days later and realize that maybe it could be better—and if you’re lucky you can still keep some of what you have and change it. The tempo of the original track was probably too fast for the lyric/story—and slowing it down gave the whole thing a grungy, dirtier feel . . . very appropriate for the song.

Thanks especially to Sirius/XM for playing this one so much–at over 6 minutes, it’s not one I thought would get much attention at radio. Here’s the final version again—click the link in the title to call it your very own–