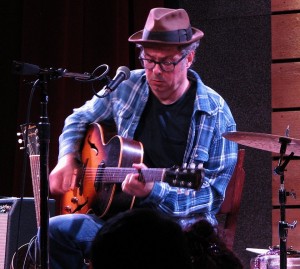 Well, here it comes: AmericanaFest. One the best weeks to be in this town for hearing the kinds of music that get tossed into the particularly vague (or, on the sunny side, “broad”) categorical box that is “Americana”. I love seeing fans/friends from out of town/state/country visiting us here, bringing us fresh enthusiasm, and new energy. And I tell them that. Unfortunately, I’ll be heading out of town just as most visitors are arriving. I’m sorry I’ll miss you, but I gotta say, I’m kinda glad to be heading up the road solo—for the shows, and for the time to think while behind the wheel. I am playing tonight and tomorrow; tonight(Monday 9/19) at the Family Wash at 8:35pm, with several friends: Mark Huff, Jon Byrd, Stephen Simmons, Tommy Womack, and Dave Coleman & the Coalmen. Tomorrow, 9/20, I’m in the backyard at Fond Object, for my booking agency’s (Green Room Music Source) party, going on around 6:30. This event, and myself, got a nice mention in No Depression in their very useful guide-to-AMA piece; you can find it here:

“Legendary”? Well, I don’t know about that. But it’s sure to be a fun party with lots of good music from folks I don’t see very often, because we’re often all traveling in different directions. Thanks to Amos Perrine for the nod…

Writing-wise, I’m on the cusp of having enough new songs for another record—and plenty of ideas that still need to be dug into deeper. Also, a few of my very talented friends have graciously sent me songs they’re working on, asking for my contribution, and I’m eager to spend time with those as well, though the co-writing thing isn’t exactly a habit of mine. (Dear pen pals, your continued patience is very much appreciated.)

Time in August felt sludgy and still, like the persistent weather around here then. Plenty to do around the house, but not much travel. That changed over the last couple of weeks, when I opened two shows for the great Jeffrey Foucault, then joined a busload of other Eastside Bulldogs along with our fearless leader, Elmo Buzz, (who I’d swear could be Todd Snider’s twin brother) for a weekend of fellowship, music, and other matters which shall not be discussed here. But most importantly: music. As much as I enjoy the camaraderie, and some of the hijinks in play while getting from one venue to another, it’s the being there, wherever “there” might be, playing the songs, that means the most. Because at this point, I’m usually playing for people who are there to listen. But depending on how I feel at any given time, the stage can feel like the most vulnerable place to be, or the most protective. Emotionally, when you’re strong, nobody can get to you there. No one can hurt you when you’re doing your thing, and (hopefully) doing it well. During shows where there’s darker weather around, internally or otherwise, sometimes I just keep my eyes closed so I can bear down on the sound, and hold on to the music. Sure, there’s the very occasional throwing-verbal-tomatoes jackass, but that’s low-grade stuff, and part of the ongoing comedy that is this nutty life. A lot of things that used to bum me out now just make me laugh. I think that’s good. Cynical, but good. I think. As Mr. Dylan said, “It’s only people’s games/you got to dodge”. It’s a weird deal–you gotta write the songs wide-open, emotionally naked, trying to stay true to what seems to be developing on the page and in the air right around you at the time, but when it’s showtime, my tendency is to go the opposite direction–button that top button, deliver what I feel surest of, wearing whatever virtual armor I can conjure at the time. I guess that’s why I like playing new songs live, once I think they’re at least almost done; it feels like a merger of the two attitudes. Or a loosening up of the latter; “letting it eat.” And the best shows, for me, are like that, no matter what song you’re playing–the music, the vibe of the room, can give a kind of permission to go where you want to go.

Radio Radio: Here in town we now have not one, but two exciting new radio stations, WXNA (101.5 FM), and WMOT Roots Radio (89.5). Last night driving home from Walgreen’s I heard Blind Arvella Gray on 101.5. On my radio. Weird, man. But so good. And the vibe is so eclectic. Reminding us how interesting and life-expanding it can be to break those rules. To hear all those different voices. May the trend continue.

To my friends in the northeast, I hope to see you at a show over the next couple of weeks; check the tour page, or bandsintown, for details. This is a solo tour, and I’ll be, as Billy Joe Shaver described it to me once after driving from south Texas to Chicago for one show, “throwing the long ball”, starting out in beautiful Providence, Rhode Island this Friday night.

My old friend from Louisiana, William McDowell, was a piece of work; one of the funniest guys I’ve ever known. He came to a show I played in Memphis a few years back. I didn’t know it would be the last time I’d see him. May he rest in peace–and may the memory of his joyous spirit linger on with those who knew him, for a good long while.

What a weekend: KG w/Jeffrey Foucault in Nashville, and w/Todd Snider on the road
Note from Arlington